"We are a community abandoned. Abandoned by the state of Guatemala, the municipality of Rabinal, and abandoned by the World Bank and Inter-American Development Bank [financial backers of the Chixoy Hydroelectric Dam, whose construction led to mass evictions, loss of property, loss of life and community, and present state of poverty and exclusion].
- Carlos Chen Osorio


It was a particularly difficult summer for those living in the Chixoy-relocation community of Pacux. A prolonged canicula - the typically short dry spell during the wet season - led to extreme drought conditions and crop failure, meaning an increase in prices for basic staples. For those residents fortunate enough to grow their own milpa - the traditional Mayan agriculture of corn, beans, and squash - up to 100% percent of the harvest was lost. Already the community is experiencing issues with malnutrition and food shortages.

Aside from the this, violence and crime appear to be on the rise - a trend mirrored throughout the country - yet more pronounced in regions where displacement and conflicts over resources and land exist. While numerous residents have been victims of extortion, attempted murder, assassination, and theft, almost no cases are investigated by authorities, as Pacux and other relocation communities are often last to receive local assistance.


In regards to the long and tiresome struggle for justice and reparations, the process appears to be at a impasse. Since the early 2000's it has been painstakingly documented - in every Chixoy-affected community - the apparent lack of services, employment, and land to continue their agriculturalist background - all of which were guaranteed before their unlawful evictions in 1982. Yet despite numerous promises by the government, including a signed Reparations Plan by former President Alvaro Colom in 2010, nothing has been delivered.

Separate from this case lies the 2012 verdict from the Inter-American Court of Human Rights, awarding survivors from Rio Negro financial compensation and public apology from the state of Guatemala for the murder and forced disappearances of 444 family members and resulting trauma. Yet again, despite international law, the Guatemalan government has yet to comply with these requirements.


While the situation in Pacux is unlikely to significantly improve without the fulfillment of these long-overdue reparations, the movement towards community recuperation is constant and in many ways strengthening. Through the help of our kind donors, The Rio Negro Project is able to support numerous community development projects aimed at improving the lives of at-risk youth. Our current projects include:


Amidst the impoverished and often bleak scenario in Pacux, the Center is a verdant oasis of growth, restoration, and empowerment. Since its initiation in March 2013, director Cristobal Osorio Sanchez has fulfilled the Center's mission of experiential learning and recovery by taking 40+ youth off the street each week and into the classroom, offering workshops in nutrition, agroecology, and small business management, as well as gender equality and Maya-Achi culture.

"While the skills we teach are important for many reasons," claims Sanchez, "what's even more essential, in my opinion, is teaching the youth about who they are: Children of massacre survivors, a once proud and self sustaining people. Without this knowledge we cannot move forward as individuals or as a community."


This summer the Center received numerous visits from groups such as the Geography Field School from The University of Northern British Columbia, agronomy students from San Carlos University in Guatemala City, a Rights Action human rights delegation from Minnesota, high school students from the Where There Be Dragons Cultural Immersion Program, and a Rio Negro Project delegation of contributors and graduate students from Oregon and New York state.

As part of our mission for north-south solidarity and educational outreach we were pleased to take in so many interested groups, and overwhelmed by the positive responses we received.

A huge appreciation, and congratulations, is deserved for the Dragon's high school group, whose fund raising campaign earned enough money for a new well, computer, and several scholarships for Center participants.

This summer's Rio Negro Project delegation had the opportunity, after several days in Pacux, to spend two nights at the Educative and Historical Center at the 'New' Rio Negro, where participants heard stories from survivors, visited with residents, and hiked the trail to the mass grave at Pocoxom.


While we are deeply contented by our successes over the past year and a half - and indebted to our contributors and partners - we are currently seeking renewed support for the expansion and maintenance of our critical development work in the communities of Pacux and the 'New' Rio Negro.

If you are interested in supporting our work, or have specific questions about our projects and/or future community visits, please feel free to contact us directly at nathaneinbinder@gmail.com, or by phone at 619-922-2996.

Thank you for your interest and please stay tuned for more updates.

Posted by Nathan Einbinder at 5:49 PM No comments:

Visit from the Dragons

For several days this past July, The Río Negro Project was pleased to host 11 high school students and three instructors from the Where There Be Dragon's cultural immersion program. 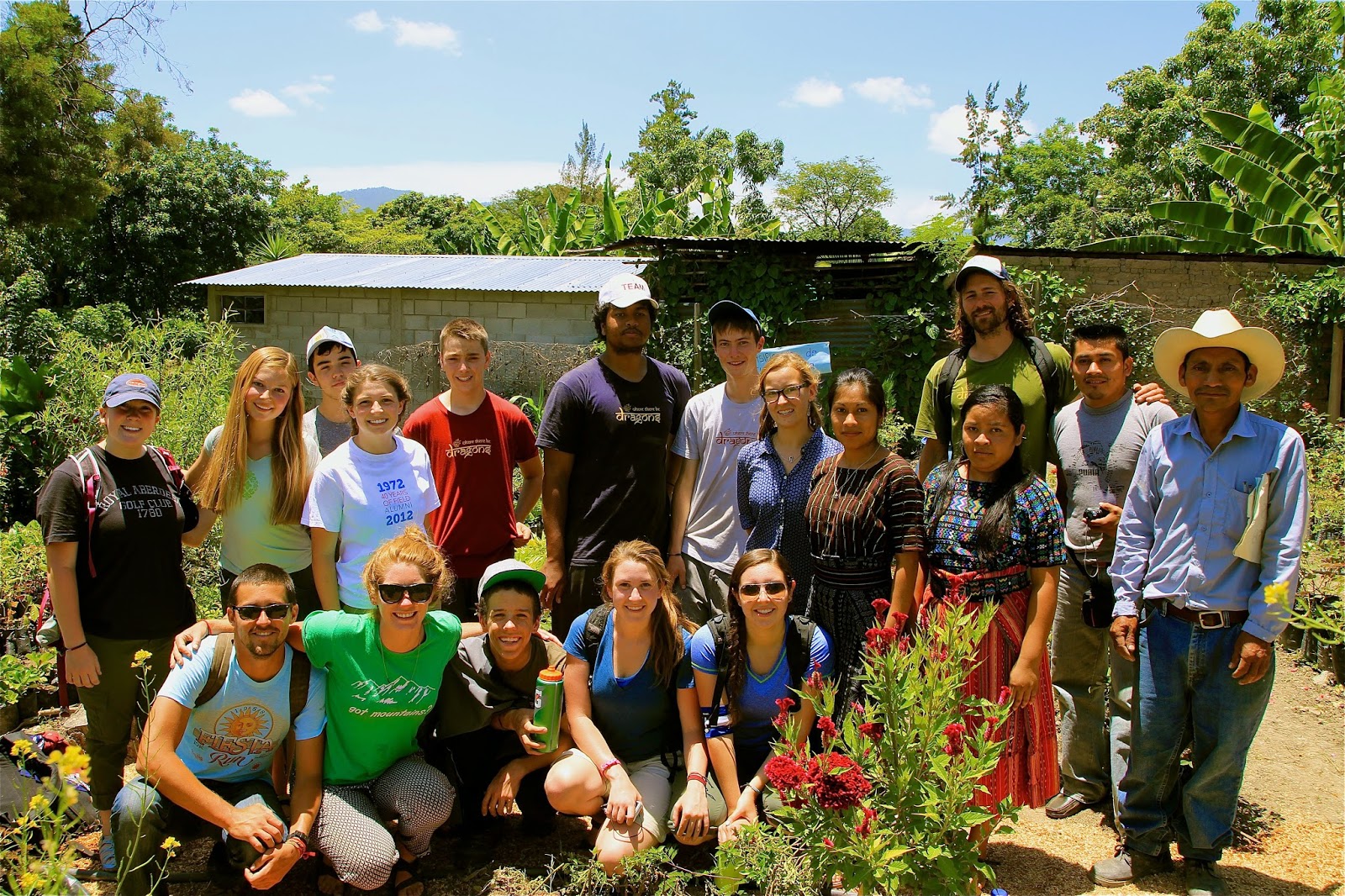 As part of their month-long tour of Guatemala, Dragon's participants visited the Pacux Sustainable Agriculture and Cultural Restoration Center to learn about the youth program and meet with its director, Cristobal Osorio, his assistant Pablo Sanchez, and several students involved in the project.

After learning about the Center's objectives - along with the history of the community - the group spent the morning in the garden, weeding, watering, and receiving informal lectures from local participants. 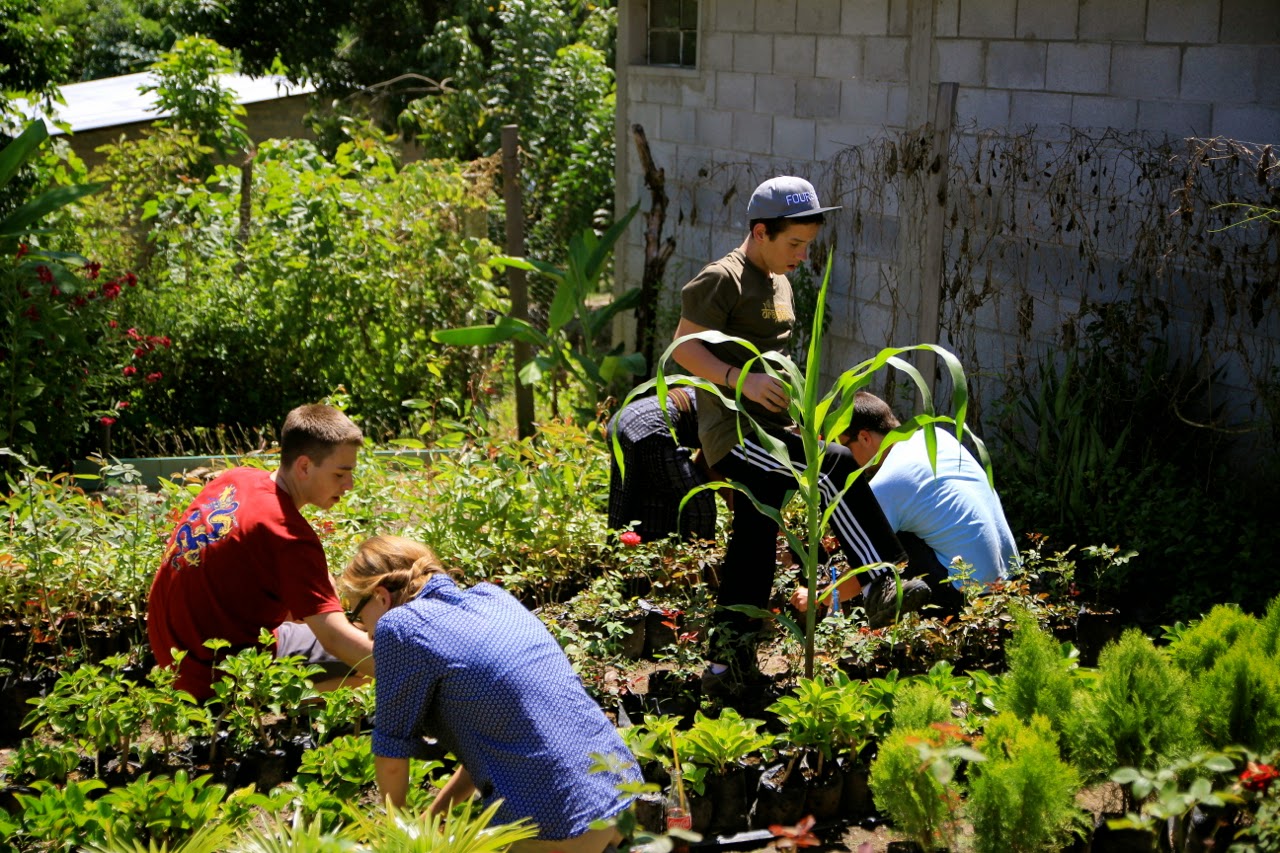 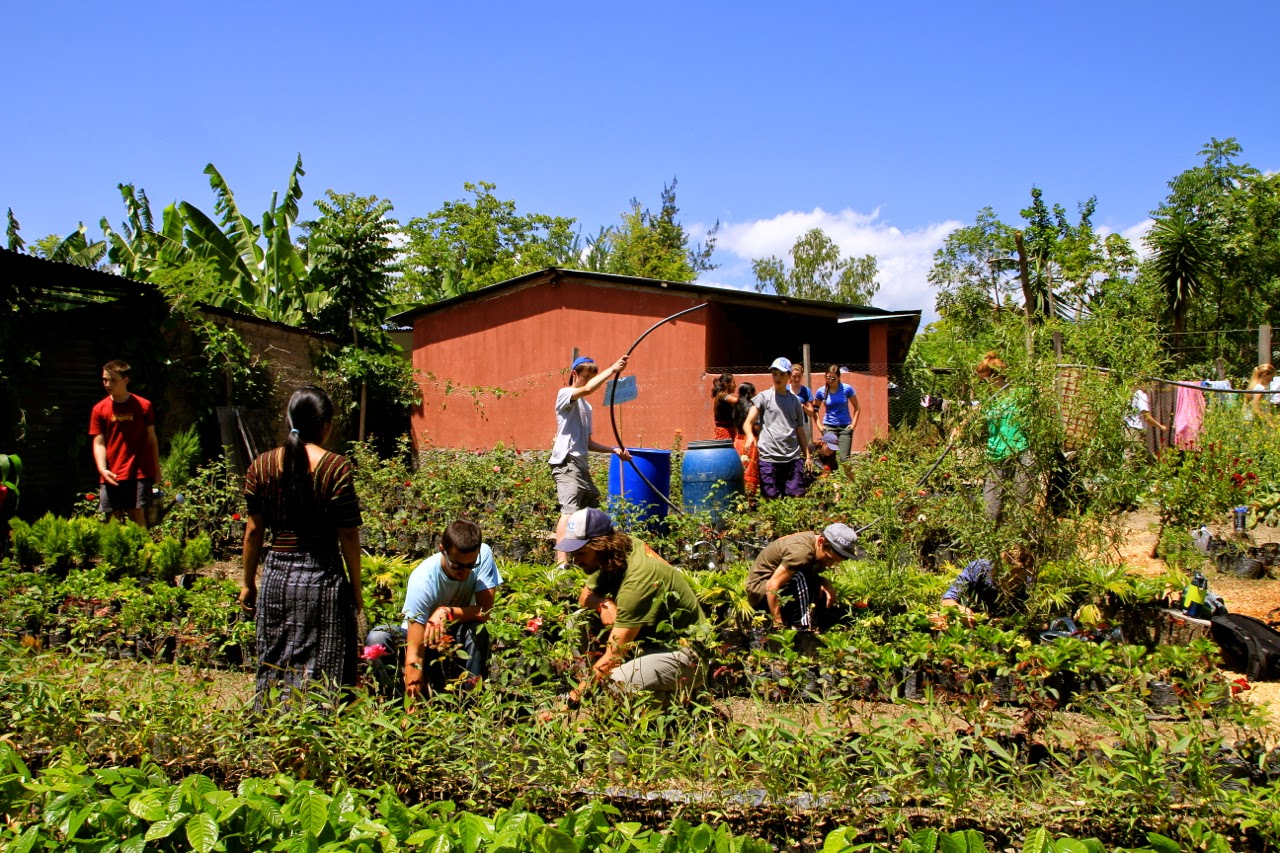 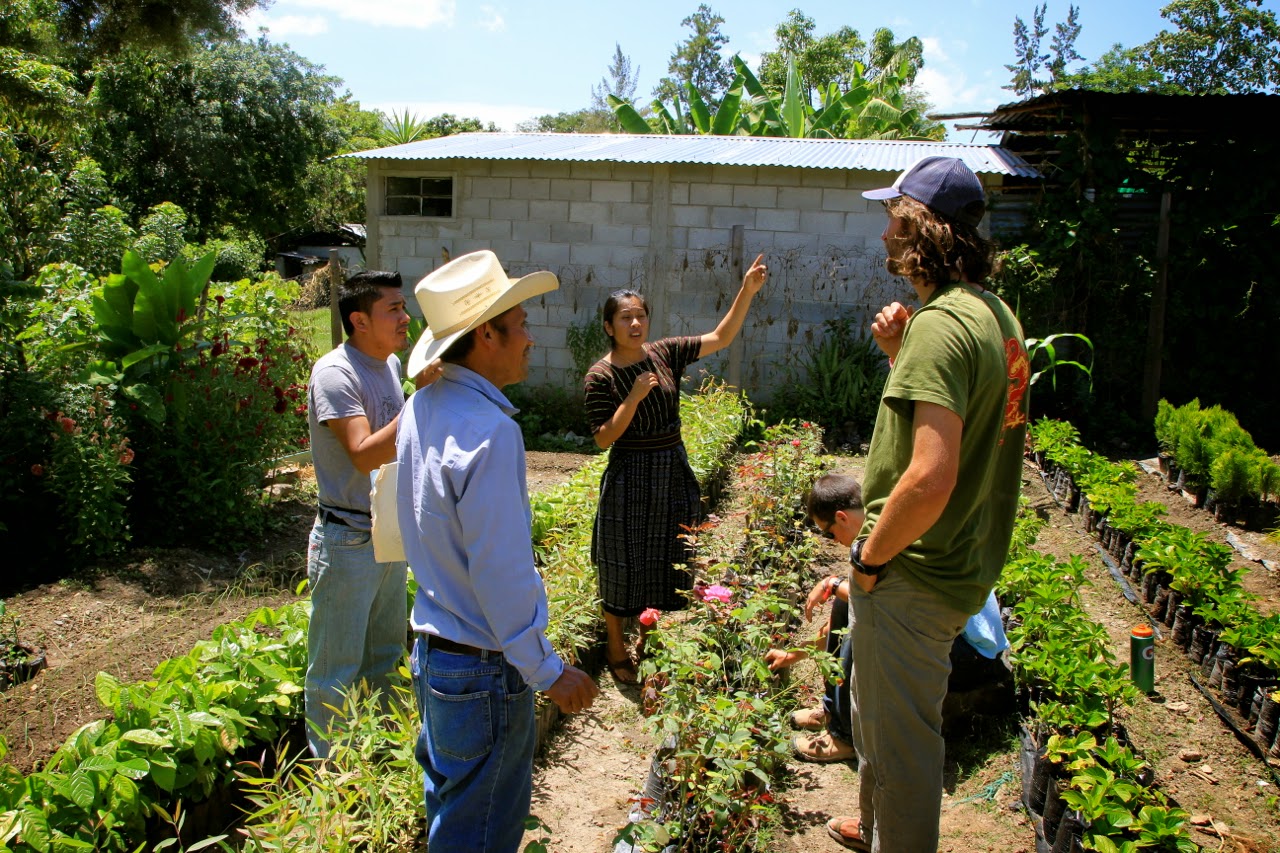 Local youth Luvia Sanchez Osorio explains to Dragon's instructors the sustainable flower project and the need for a new well, which busted this past Spring.

"To continue our success with the demonstration garden," says Luvia, "as well as the production of flowers for seed and sale in the market, we need water during the drought season for irrigation."

As part of their commitment and dedication to the critical work taking place at the Center, Dragon's students initiated a fund raising campaign in order to raise the necessary funds for a new well.

Please visit this site to learn more about this exciting campaign! http://www.wethetrees.com/campaigns/the-well-is-dry-food-security-for-guatemalan-genocide-survivors

For more information about the Center, funding and visiting opportunities, please contact me directly at nathaneinbinder@gmail.com or by phone at 619.922.2996
Posted by Nathan Einbinder at 10:54 AM No comments:


Thanks to generous donations received in 2013, The Rio Negro Project was able to support the Pacux Sustainable Agriculture and Cultural Restoration Center, a new development initiative in the Chixoy Dam relocation community of Pacux, Guatemala.

****
For the history of this community please follow the link to Pacux Profiles
http://rionegroproject.blogspot.com/2012/12/treinta-anos-despues.html

The Pacux Sustainable Agriculture and Cultural Restoration Center was founded this past March with the objective to improve the lives of at-risk Maya-Achi youth, ages 13-17, by teaching them about sustainable growing techniques and small business management, along with supporting the on-going process of cultural and community restoration.

After obtaining sufficient funds this past April, The Rio Negro Project, in conjunction with ASCRA, the local development committee in Pacux, was able to hatch the project by buying a parcel of land in which to develop demonstration gardens and beds for organic flower production, as well as a small house to hold workshops and classes.

While the main purpose of the Center is for skill building in the field of sustainable and indigenous agriculture, with the ultimate goal of increased food security as well as economic opportunity, Cristobal and members of ASCRA are also dedicated in teaching workshops and seminars in gender equality, social justice, and historical memory.

"In teaching the youth about organic and sustainable agriculture, as well as teaching them about who they are - indigenous Maya-Achi, the offspring of massacre survivors from Rio Negro - we hope to recuperate the youth of this community, many of whom are unemployed, uneducated, and suffer from low self worth," Cristobal told a group of international observers this past December. "We hope that, through this project, we can better our community by empowering the youth. And in just six months we already see amazing progress."
Here is a list of The Center's achievements since April 2013:
·      Purchase of land (~1 acre) and a small building in which to house center and propagation gardens
·      Construction of permaculture garden with traditional vegetables and herbs
·      Construction of 10 garden beds for organic flower cultivation
·      25+ workshops, successfully engaging some 40 boys and girls
·      Development and implementation of after school garden maintenance program

Based on the success we witnessed during the December 2013 visit, The Rio Negro Project, in conjunction with ASCRA, hopes to expand the operation by purchasing more land, as well as maintain its regular scheme of workshops and outings. While the end goal of this project is self-sufficiency through the sale of organic flowers at the local market, at present we are counting on outside support to keep this successful pilot afloat.

Here is a partial list of objectives for 2014, with costs:

Anything over $100 will qualify for a tax deduction receipt.

We are eager to see this project follow through in its objective in bettering the lives of massacre victims and their children, as well as improve the environment surrounding Pacux. If you are interested in visiting this Center please contact Nathan directly at nathaneinbinder@gmail.com.

Thank you for your support with this important work.